On the 5th February 1941 an announcement was made that a new cadet force had been granted a Royal Warrant – the Air Training Corps. The aim of the the Corps was to provide pre-entry training to young men who were looking to join the Royal Air Force when they were called up for military service.

The good citizens of Bishop’s Stortford, eager to ‘do their bit’ for the war effort immediately set about raising a squadron for the new Corps.

Three days after the formation of the Corp an notice was placed in the local paper, the Herts & Essex Observer, with further details the following week. 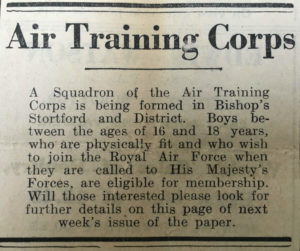 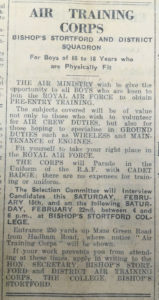 Just over twenty years had past since the Great War and therefore the town had a pool of ex-service personnel to call upon to staff the new squadron.  The man chosen to lead the squadron was Captain Edward Noel Griffiths.  Captain Griffiths was originally commissioned into the Oxon & Bucks Light Infantry in 1916.  He transferred to the Royal Flying Corps soon after where he trained as a pilot. In 1918 he became a member of the newly created Royal Air Force.  In those early days, the RAF still maintained army ranks, so he had the distinction of being promoted to the rank of Captain within the Royal Air Force.    As commanding officer he was re-commissioned at the equivalent rank of Flight Lieutenant on the 25th March 1941. 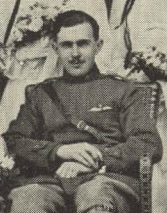 Flt Lt Griffiths in 1917 when he was a Lieutenant in the Royal Flying Corps.

Every squadron needs a headquarters.  One of the founder members of the squadron and the first chairman of the squadron Civilian Welfare Committee was the headmaster of the Bishops Stortford College,  H. L. Price. Mr Price secured the use of a standard hut within the grounds of the College. The squadron was based within the college throughout the war, although the rapid increase in squadron strength meant that it was necessary to utilise other parts of the college to conduct lectures.

7:00pm on a Tuesday night in March 1941, 1096 (Stortford & District) Sqn ATC held its first parade evening at its headquarters located in the Bishops Stortford College grounds.  Over fifty cadets are in attendance. The cadets have all been interviewed over the last couple of weeks and have been streamed into those wishing to become aircrew and those who want to be ground crew.

All cadets follow a course of physical training to ensure they will meet the Royal Air Forces fitness criteria, along with drill practice and marksmanship training.  Those going for aircrew will study subjects that will be of use in their chosen field, advanced navigation, signals and aircraft recognition.  Those going for ground trades will study subjects such as wireless operation and engine mechanics

Norman joined the squadron during its first full year of operation, 1942.  Aged 16, Norman was working on a building site by day and then would cycle from his home in Sawbridgeworth to attend parade nights each week.

Cadet activities were not all classroom based.  Air Experience Flights were given by the 9th USAAF at Stansted in Marauders every Sunday and in Ansons at RAF Debden.

With so many operational airfields in the areas the Home Guard were busy watching for enemy parachutes and cadets acted as runners between observation points in Hatfield forest.  Cadets often acted as crashed German aircrew during exercises, tried to infiltrate the Home Guard HQ (the Nags Head on Dunmow Road) and usually succeeded. 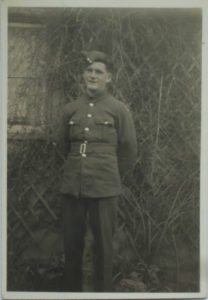 Norman left the squadron in 1944 when he received his call-up papers.  Although he had been training to be a rear-gunner, by 1944 the Allies were on the way to achieving air superiority and the Air Force’s demand for  personnel had dropped considerably.  So Norman along with many others found themselves in the Army.  He served three years in the Northamptonshire Regiment before returning to civilian life.

If so then please get in touch with us and help us reclaim that missing history.

We would love to hear any stories you may have of your time with the squadron or see any photos you may have.

If you would like to get in touch then simply send us a message via the ‘Contact Us‘ page.

Our next intake date will be:

Inform the squadron if you cannot attend

How to Find Us